This is a book that almost did not come into the world. A few times. It had a long gestation and very delayed birth. The project often shuddered to a halt as either life took over or I just got discouraged from pursuing it. The day the actual book arrived in boxes was like seeing a new-born child. I felt immensely proud of it.

Of course, being one of the few illustrators who specialise in this genre, I was often asked my thoughts on the book and it was suggested I make my own version. My initial thought was simply to illustrate a few scenes from the novel and try to find a publisher who might wish to republish the book, but after a few approaches there appeared to be little interest in a new edition and the rough sketches just lay around for a few years. I sometimes toyed with the idea of releasing them as a set of prints, a portfolio of artwork or even as a graphic novel but it did not seem economically sensible. Previous experience taught me that prints of niche erotic artwork are difficult to sell (how many people would put them on their walls?) so I abandoned that idea and never having had any interest in comic strip could not seriously go down that route either. My interest to develop them remained however and so at last I conceived the idea of making my own book with my own translation. I reckoned that given the broadly popular appeal of the novel a book might be saleable and that perhaps seeing everything put together in a readily marketable form I could also at least approach publishers again.

So throughout 2012 I translated the novel myself. I had been dissatisfied with other translations, especially the copyright-free version by “Fernanda Savage” of 1921 which is rather stiff and old-fashioned in style. I preferred not to license an existing modern translation, nor did I know how to go about it.  How could I feel confident enough to do this translation effectively?  Well, I admit that my German is not that of a professional translator. But I took comfort that in the past translation was a more informal affair than it is today – Thomas Carlyle, for example, translated Goethe without a formal degree in German using only a basic dictionary. More importantly, I could justify that I understood the author’s thoughts better than any other translators and so I overcame any hesitancy in that regard. In parallel I proceeded to work on the ten main watercolours and cover and wrote to literary agents and publishers asking if they would be interested in publishing an illustrated book with completely new translation. Surprisingly or not, depending on your experience of the publishing world, I received only politely phrased refusals.

Early in 2013 all the translation was complete but I felt that to market it as a printed book it needed to have more than just ten paintings. So I designed twenty more line illustrations, and with the aid of a publishing programme laid out the book myself inserting all the illustrations into my own translated text – well, I have a training in graphic design as well as illustration so although it was not a simple matter, it was within my capability. I also received a lot of help from Tim Woodward of Skin Two, who is very experienced in publishing. You’ll be asking now if I printed the whole book by myself. Well, much as I’d like to impress by showing you my own printing operation, in fact I did need to find the services of a printer, but apart from that it was very much self-made.  Thanks to a few ‘angels’ and some good luck financially I was able to fund the printing of the book and the book was eventually published within the imprint of Stiletto Books.

The book has had a great reception and now I am beginning to see the stock approaching depletion. It will not be re-published and stock will not always be available. Now is the time to buy unless you wish to buy second-hand copy for an inflated price later on.

See the dedicated page to Venus in Furs

A birthday portrait of She Controls commissioned by one of her devoted admirers, sissy claire, who is featured symbolically as an adoring cat on her lap when serving and chained like a doll inside a glass container when not in use.

Please remember if you are commissioning for a birthday to leave a few months as there is usually a waiting list for commissioned artwork.

Eric Stanton must stand as one of the most influential fetish artists of the last century. If you’ve never seen his work the admirable blogger “Richard” provides a very good archive and intro . He really was the first purely fetish artist I’d ever encountered though I remember not being too keen on his bondage art at the time. I was then – unlike now 😉 – a little squeamish about seeing women suffering, so while I liked the artwork and the sense of the bizarre it conveyed, it didn’t quite hit the spot for me. But as there were few enough artists working in the field I initiated a short correspondence with him in the eighties, sending some of my art by post and asking his advice on directions within the fetish art world. My letters to him came back marked up with his friendly comments – I guessed he was a busy man and he told me he was suffering from eye problems at the time. In those days he was a respected artist within his field but by no means as well known as he is now. I cannot recall much of the content of our letters but I do remember he just told me to wait until the world came round to see things as we did and joked bitterly, as many an artist does, he’d be famous after his death. And now he is.

I really preferred -and still admire -his earlier art. “Bound in Leather”, for example, conjures up such a magically perverse world, though only portrayed with a simple black & white watercolour. It is obvious how much love he had poured into the series. There are no submissive men in these compared to the later “Stantoons” series, but I was not such a fan of the latter as I felt they were sketchy and produced under duress. As a commercial artist working in a narrow field the quality of Stanton’s artwork was probably affected by external circumstances – lack of time to complete, dissatisfaction with payment, family issues, etc. so that he may not always have given his utmost attention. He may also have been fulfilling requests to draw in that way.  I perfectly understand that pressure myself.

Or maybe I was never into physically powerful women -or wrestling.

Without his influence though and the advice he gave then, I doubt I’d be persisting in this field of artwork. Even if you know it, take time to look at Stanton’s artwork again – even in an age of overwhelmingly abundant imagery it still inspires.

Before I go back in time, let me briefly explain where I am now.  I am owned by Mistress Eleise under the terms of a Contract of Servitude which I voluntarily signed in late 2013.  Under this contract of Servitude I am her slave and she has absolute control of my sexual activities and direction.

In commissioning artwork from Sardax, I wanted the artwork to represent or display as many facets of our strengthening relationship as I could.  Not that my decision was the final one of course – Mistress Eleise played an integral part in the planning and design of the commissions.

If that is where I am now, what path did I take to get there?

Initially the furthest these desires ever took me was to following booted ladies along rain-drenched streets and dreaming of kneeling before them.

The scene pre-Internet was transient, with fewer ladies dedicated fully to the lifestyle profession and those that were committed a lot harder to find and access.  As a result I experienced many ups and downs – the joys and despair of sessions either hugely rewarding or hugely disappointing.

Encounters with many Mistresses in those days were more commercial – largely centred around a short-duration male sexual urge and fulfilment facilitated by a female for financial gain – with limited opportunity to develop a chemistry beyond the physical interaction into true worship and devotion, contractual slavery and absolute relinquishment of control, in the manner which I have now been able to develop with my owner Mistress Eleise.

The internet allowed communication and dialogue to take place before and after encounters, for philosophies to be explored, and for chemistries to be better defined – thus intensifying the experience for all parties.  Yes, there are Mistresses who are still driven solely by the commercial aspect of the relationship but there are also fabulous Women in the scene today who view Female Supremacy as the founding stone for what we do and who genuinely believe in their right to control, subjugate and use inferior males.  Deeper and more meaningful relationships are now more easily structured.

I have such a relationship with Mistress Eleise. She owns me. She decides how I worship her, how I suffer for her, and what freedoms or constraints I live under. Our relationship is about her pleasure and is not about me to any extent. I do need to state that I am treated with the utmost care and respect by her, but that is within the confines and parameters of an intense sadomasochistic relationship, with her as orchestrator.

As a natural progression from the current status of our relationship, our intent is to evidence in the most appropriate way her ownership of me.  At an appropriate time in the future, assuming I continue to earn my right be her devotee, I will be branded with her initial. In preparation for this event, I commissioned this artwork by Sardax to illustrate how our ceremonial event might appear.

Key facets of our (but particularly her) intent are illustrated expertly by Sardax.  It is Mistress Elise’s intention to invite some of her esteemed colleagues to witness the event and they can be seen in the artwork.  It is my hope that, with the letter “E” burnt onto my buttocks, I am led by Mistress Eleise on a leash around to each of these Ladies so that I can worship them in whatever manner each of them so desires. I am in bondage and gagged, released only when Mistress Eleise has finished her torture or body modifications.

And so, where do I go from there on this intrepid journey of pain, abuse, humiliation and degradation?   Well of course I can’t begin to imagine because the choice is not mine, it’s Mistress Eleise’s.” 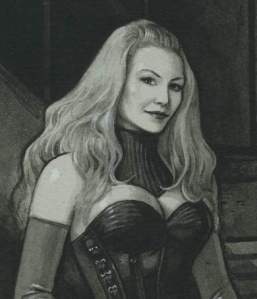