For this commission I had a pretty open brief. The email said simply –

“My idea is a group of smoking Mistresses standing over a naked male ‎as they are about to flick their ash into his mouth.”

The only other unusual stipulation to this was that the victim wished for his head to be trapped in a car tyre – no problem!

So in fact rather than depict a chosen person – as is usual – I could choose anyone to draw as a model or simply make it up from imagination. As I was considering this and finding that a lot of London mistresses had actually given up smoking, the wonderful Romanian Mistress Ezada and her two compatriots Lady Yna and Mistress Lilse all happened to be in London and, as smokers themselves, were happy to pose for the drawing (see my sketches of them at the Femdom Ball) As an added twist I drew them in military outfit to add to the atmosphere of captivity.

Originally the idea was simply to show the situation of Madame Caramel being presented with a card, regally seated on the throne in her dungeon – a very well-equipped premises, by the way – but then we came up with extending the idea by adding a message to this and covering it up with a paper flap for surprise. 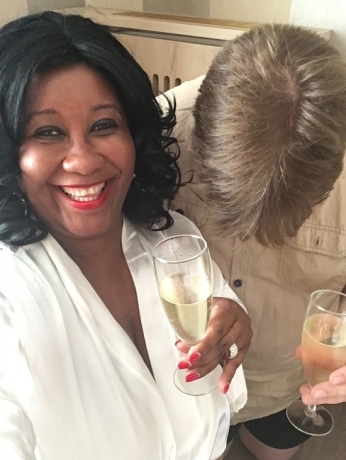 Joris presented the portrait card to Madame Caramel during a special surprise holiday in May and she tells me that she was very happy with it and better still, unhesitatingly accepted the offer of marriage. I am so pleased that I was able to play a part in this happy event and wish the couple many years of happiness to come.

Last year She Controls received her first Sardax portrait  for her birthday and was so pleased with it that in January of this year another of her admirers commissioned a second for her. He wished to show her as the manager of her own bank -Bank of She. (No withdrawals permitted!) To show the cash being piled up but also her face and the willing depositor required a slightly unusual composition, from over the shoulder. Together with a rather distorted perspective it gives a surreal look to the scene .

Please remember if you are commissioning for a birthday or anniversary to leave a few months as there is usually a waiting list for commissioned artwork.

Mistress Amrita is a very well-travelled Japanese mistress who is here depicted in a historical setting -perhaps a decadent scene from 1930’s Tokyo. Although she is wearing a traditional Chinese sheath dress (cheongsam) the setting of a screen and paper lamp makes it clear this is Japan. She sits on a wealthy businessman who has brought lots of money for her amusement. His amusement will only be the slashing of her whip which he now holds tightly in his mouth!

Please remember if you are commissioning for a birthday or anniversary to leave a few months as there is usually a waiting list for commissioned artwork.