This recent series – made for Japanese magazine “Goddess love” (女神の愛) takes the theme of a drinking-club in 1920’s Germany, at the time of the Weimar Republic, where the main female characters are played by world-famous mistresses. I wanted to show a decadent and raffish atmosphere, but add a sense of nostalgia for a past period of modern history.
This is a club run by females for females, but also for subservient men so long as they are well behaved and paying :- if not, a strict management policy is enforced!

1. In the first scene Domina Liza, dressed in an opulent fur coat, is shown pointing to the illuminated entrance of the club. Her besotted and extremely wealthy slave will be required to take her inside for an exorbitantly expensive evening.

2. Now we see Lady Lola, playfully teasing a waiter who is dressed in a pretty waitress outfit. Her touch is obviously upsetting him so much he is likely to spill his tray at any moment.

3. The scene moves outwards to Mrs Weltsova who is sitting on a stool, sipping her cocktail, her feet being worshipped by an obviously drunk customer who is behaving very indecently . 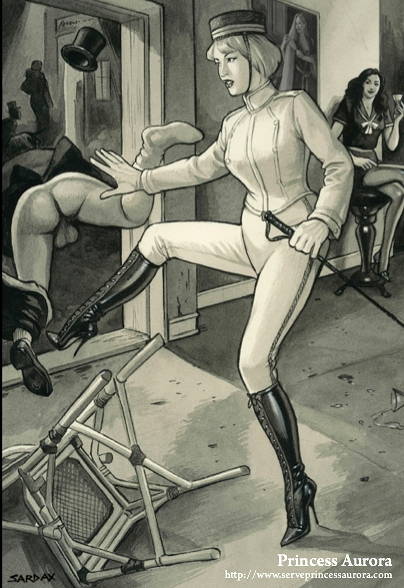 4. Over comes Princess Aurora in her military-style costume and ejects him swiftly from the premises with a well-directed kick from polished boots. No rowdiness in this club!

In the tradition of these series it moves à la ronde back to the first image where the disgraced customer finds himself  collapsed in a heap and half-conscious beside the entrance.

If you live in Japan you can buy the present issue -No 15 – from Amazon.
Regrettably the magazine cannot be bought overseas. 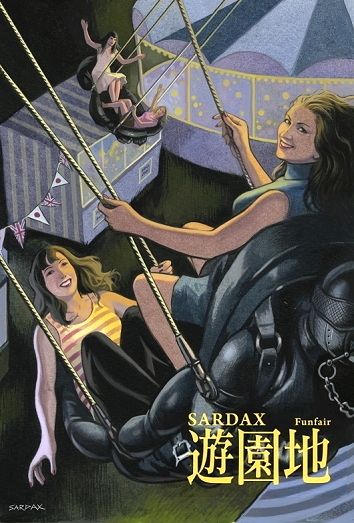 In the first frame a pair of swing boats, supported by males tightly bound in black leather, showing the main participants in this series, Joanna Lark and Mistress Elizabeth Swan in the foreground and Mistress Evilyne and Mistress Elita.

In the second a carousel with male horses! Mistress Elizabeth is here riding one of her  submissives and behind them Mistress Evilyne with ‘kurdy’.

In the last frame a much darker scene – the “Torment Tent”. Mistress Elita touches a very suggestive lever of one of the electric shock-boxes, noticing the fear in the victim’s eyes, while Joanna Lark peeps in curiously.

If you live in Japan you can buy the present issue -No 12 – from Amazon.
Regrettably the magazine cannot be bought overseas.
https://www.amazon.co.jp/別冊秘性-女神の愛vol-12/dp/4776915707

I first got to know the beautiful and astonishingly influential Sidonia von Bork, the amazing force behind the English Mansion, in the early part of my career. Characteristically helpful towards an artist, she wanted to commission an artwork as she has done several times since. She named herself after a renowned German/Pomeranian femme fatale of the 16th Century who was accused of all sorts of wickedness. The pre-Raphaelite artist Edward Burne-Jones made her the subject of one of his paintings.

The present-day Sidonia is thoroughly English and in character nothing like the historical figure of course-all visitors leave the English Mansion completely safe and sound!  I was intrigued enough then to make my own drawing of her, dressed in a similar Renaissance costume.

The magazine “Goddess Love”, unfortunately not for sale outside Japan.

Around 2000 I was contacted by an old “China-hand”, many years out in the East, with a request to draw out six scenes of his oriental fantasies. He was very specific in the type of lady he wished me to draw – trashy, middle-aged, high-income, arrogant and vain. Leather skirts and high-heels a must. While this wasn’t exactly what I idealised I warmed to the project and the fantasies proceeded easily and imaginatively.

The results speak for themselves. Here are some of them.

Thereafter we collaborated on a membership website for a year called Oriental Whip Queens-now defunct. Nimrod developed his own style of artwork until circumstances led to him to setting up his own individual site – Studio Oridomain. (Also on twitter @Nimzart ) It has been running for a few years now and is full of his own inventive fantasies. Even if middle-aged oriental women aren’t quite your thing  the sheer breadth of imagination in the scenarios will take your breath away. Do support this self-made illustrator. 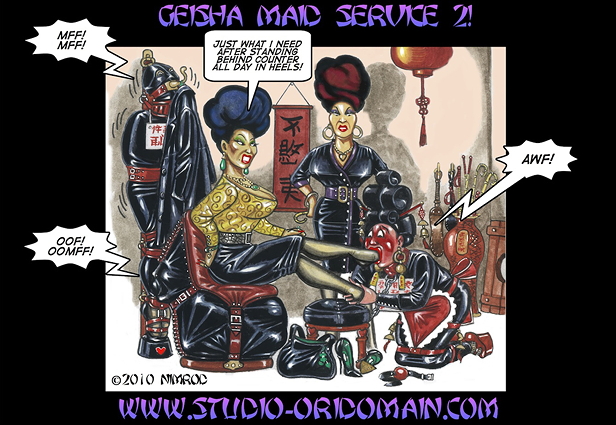